The US Navy Classification of “Monitor” Patrol Boats, were a type of Patrol/Surface Combat Vessel, deployed during The Vietnam War. Named for The American Civil War “Monitor”-Class of Ironclad Warships, they were nicknamed “Tango” from The Military Radio Phonetic Alphabet. Part of the “Brown Water Navy”, it the first time since The American Civil War that a specialized River Fleet was deployed in War. Starting in 1965, The “Tango” Boats were seen as vital to Military Operations. Due to the massive and quite extensive river and waterways system of Vietnam, American Forces were well aware of The Enemies great use of waterways to transport weapons and supplies. The “Tango” Boats were tasked to engage Enemy Forces and provide Interdiction.

The US Navy created it’s “Fleet” from pre-existing Small Vessels. Officially named The “Mobile Riverine Force” (MRF), a typical “Tango” was 60-feet long and 17-feet wide. Displacing 10-tons, Armor Plating ranged from 1.5 to 3-inches. They were powered by Twin Marine Engines, (double screw), and could achieve 15-mph. Crewed by 11, The “Tango” was armed with Flamethrowing Projectors (Napalm), Quad Bofors 40mm Guns, as well a 7.62mm and .50 Cal. Machine Guns. These could be Double or Quad mounted. The US Navy put over 200 such Craft on The Mekong Delta between 1965 and 1972. 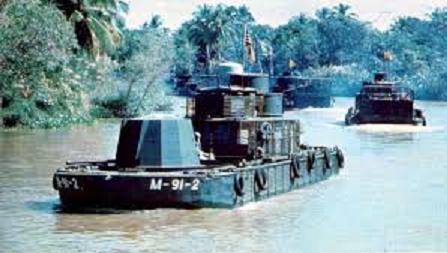