While the use of Marine Combat Forces are the official component of many National Navies and their defense abilities, at on point – The US Navy maintained a separate ''Infantry'' Force from 1864 until 1939. While these men were NOT specially trained as Marine Corpsmen were, they trained and emulated much of their training and combat protocols. The Naval Infantry were first and foremost Sailors. However, they were specially trained in Boarding Tactics (and the repelling of such) – as well as the ability to staff and maintain Coastal naval Batteries (Artillery).

From 1864 (the last year of The American Civil War), there was a very limited number of US Marines. Traditionally (since 1775), Marines were used as Ship Security and Defense primaries as well as serving as Amphibian Landing Force (when needed). To compensate for this, The Navy began to train and use ''Naval Infantrymen''. Even when the numbers of US Marines reached acceptable levels, The Navy maintained it's separate Force. However by World War I and American involvement – most Naval Infantry were regulated to Coastal Artillery Garrisons. By 1939, The Navy disbanded it's Force (with The US Marines taking over all these previous duties save Coastal Artillery, which was maintained by The US Army).

The US Naval Infantry maintained their own set of Colors as well. A Dark Blue Field, centered in The Field was a Prone Diamond in White. Superimposed inside was a Blue 19th Century Ship's Anchor. No Unit or name identifiers were placed. The Flag would be flown during a Shore Landing (when Forces set up a Security Perimeter) and always from a Coastal Artillery Garrisoned by them (along with The US National Colors). 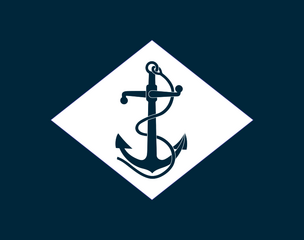