Although used by many North American Law Enforcement Agencies as a Dress Uniform Hat, The US Model 1911 Campaign Hat is more closely associated with The US Army in the early 20th Century as well as the standard issue Headgear of Basic Training Drill Instructors, even today. With it’s origins traced to the 1840s, The Model 1911 featured a trademark Hat “pinch” to it’s Crown, created by Soldiers on the Field. Known collectively as The “Montana Pinch”, this was a 4-fold  indentation popularized by Montana Cowboys. The Pinch was seen in wide use in The Spanish-American War.

So popular, by 1911 – The US Government began issuing a Campaign Hat featuring the pinch built in. The Hat was the standard issue from 1911 to 1942. Brown in color, The Hat featured a large rounded brim. Various Hat Cords around the Crown were the only form of decorations used. Officers used various Gold or Silver colored Cords, while Enlisted Men used the particular color of their Branch affiliation  (Blue, Red or Yellow). The Model 1911 would be replaced in 1942 by both The Service Hat  (referred you as The Combination Hat in some Nations) and The Flat Cloth Garrison or “Overseas” Cap. The Hat became iconic on America when it was adopted for use by The US Forestry Service. Used even today by Park Rangers, The Hat was a trademark for it’s Public Service Band Trademark character “Smokey The Bear”. Used to provide awareness for forest fires, it is still used as such.

It’s genesis for use as the iconic Drill Sergeant Hat (now used by all American Service Basic Trainers), is a direct link to it’s World War I days. The same is traced to most American States that deployed a State Police Agency. The majority of these Law Enforcement Agencies were born out of a State National Guard, which also used The Model 1911. 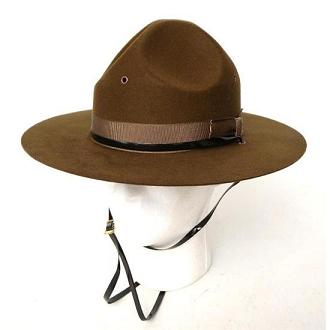