Deployed in 1969 with The US Army in The Vietnam War – The MIM-72 “Chaparral” was a Surface To Air Defensive System. (4) ''Sidewinder” Rockets were quad mounted on a Mobile Delivery Vehicle. The most common was The M113 Armored Tracked Vehicle. The MIM-72 was most commonly deployed with the previously discussed “Vulcan” (M163) Air Defense (Gatlin) System. As early as 1959, similar US Army Ground Based and Mobile Missile Systems were experimented with and deployed. With most systems, The US Air Force took over operational control and development, with The “Chaparral” being one of the first designed for The Army since that takeover.

The MIM-72 weighed 10-tons and supported a crew of (2). These Soldiers also drove and deployed the Missiles. These vehicles were 15-feet long. Deployed late in The Vietnam War, The MIM-72 became more of a Cold War weapons system – with many such Batteries being deployed in South Korea and Europe. Some variants are still in Service with many Armies throughout The World. The US Army phased out their last “Chaparral” Batteries in 1998. 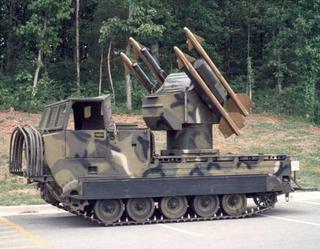