The Silver Star Medal is the 3rd highest Award of Valor, given by The United States Army. Given for "gallantry in action against an Enemy of The United States", it was authorized by Congress in 1932. The Medal replaced The "Citation Star" Award which was much smaller, and awarded for Combat Service towards the end of World War I in 1918. Eventually, The Silver Star was issued to all US Armed Forces. Issued in great frequently during World War II, it is estimated over 150,000 such Awards were given during World War II. Interestingly, The then War Department, did not maintain records of all Awards. This was due to The Silver Star being given by many Field Commanders (who in turn did not send forward official recommendations). The record keeping was finally updated in the 2000s - in keeping with America's involvement with The War on Terror.

The Silver Star can be received multiple times, by virtue of the attachment of small Oak Leave Clusters to the ribbon. The highest Award of Silver Stars to one person, was US Army Colonel David Hackworth, who  (during The Korean War of 1950-1953), received 10 such Awards. The Silver Star is a Silver/Brass composite (although it was more "Silver" in color during World War II). The Medal is shaped as a 5-pointed Star. An engraved Wreath is placed in the center, with a smaller 5-pointed Star (this was the original design of The "Citation Star" Award). The attached cloth ribbon, is a series of 9 Red, White and Blue Stripes. The Silver Star can be awarded to Foreign soldiers assigned to The US Armed Forces, provided they still qualify as any US soldiers would have to. 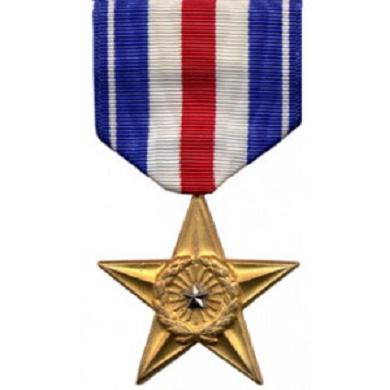