The “Mace” Surface To Air Missile System was designed to incorporate American Military Defense and Offense abilities Overseas. An improvement on the previous “Matador” Class of Missile, The “Mace” could be deployed from either an underground launch System or Trans Launcher System, making it a Mobile Device when needed. The basic design and development of The “Mace” identifies it as an early form of the later Cruise/Guided Missile.

First deployed in 1956, at it’s height – over 400 such Devices were fielded. Capable of over 540-mph, The MGM-13 was also able to evade Radar by maintaining a flight level of 730-feet (no small feet for a Missile of The Era). It could achieve 1,300-miles in altitude and was able to support both Conventional and Nuclear Warheads. 44-feet tall with a 4-foot diameter, The “Mace” was a solid fuel, multi-stage Device capable of 100,000-pounds of thrust. A separate Turbojet stage handled it’s final in-flight adjustments before impact of target.

In addition to Europe, The US Air Force deployed MGM-13 to many South Pacific Installations to include Japan, Okinawa and South Korea. Decommissioned in 1969, many MGM-13s became Training “Drones” for more advanced Surface To Air Missile Platforms and advanced Fighter Jets. 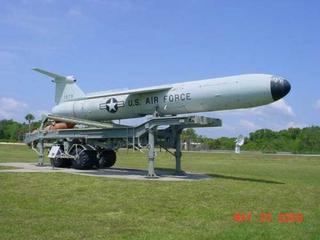