Known as "The Marauder", The B-26 was designed in 1940 by The Martin Company and first flown in 1941. The Bomber was engineered with specially designed wings to enable it to run sorties at it's operational ceiling of 26,000 feet. Capable of carrying 5,200 pounds of ordnance, The B-26 was also armed with twin .30 cal. Machine Guns in it's front (nose) Turret, 1 in it's rear (tail) Turret and 2 in a Dorsal Turret. It crewed between 5 and 7 men. The Marauder was 56 feet long with a 56 foot wingspan. She was capable of a strike distance of 1,250 miles. A Twin Pratt and Whitney Wasp Engine operated twin propellers which gave The B-26 an airspeed of 320 mph. The B-26 earned the dubious nickname of "The Widow Maker", from several sources. The first was it's constant crashing on both take off and landing during test flights. The other was it's difficultly with instrument control at altitude (making her operation only for more experienced Pilots). The Marauder still had an impressive service record, being the lowest casualty producing Bomber in Service in The European Theater of War. She also performed admirably in The Pacific as well. It is estimated that her Model flew over 110,000 missions and dropped over 150,000 pounds of ordnance. Over 5,000 Marauders were built, with half being sold to The British Royal Air Force. By 1945, production has ended. 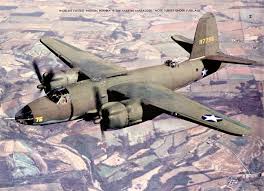