US Mark I Trench Knife

The horrors of Trench Warfare were a tangible thing to all sides involved in World War I. The mud, cold and obvious sickness (both natural and man-made), made fighting in these exposed earthen tunnels – difficult at best. Gone was the need for the traditional long rifles – with even longer bayonets. Shorter and smaller weapons were better suited for the intense close quarters fighting all sides experience. In 1918, The US Army issued The Mark I Trench Knife. Based in a small part on the iconic “Bowie Knife” of the 19th Century, The Trench Knife consisted of several weapons in one. The blade (which was double edged), was sharpened to a point. Ranging at 8 to 12 inches long, the blade was mounted onto a handgrip shaped into a type “Brass Knuckle” fighting device. Made of iron, they often featured additional protrusions to “enhance” the damage caused by a strike. Heavy at 5 pounds, often soldiers would “notch” the blade – creating a weapon capable of inflicting EVEN more damage. 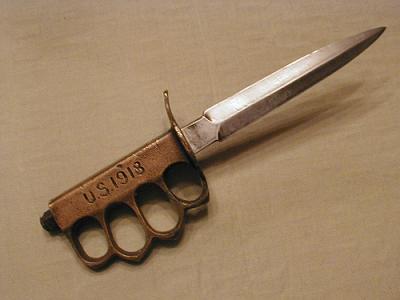