Nicknamed The “Lazy Boy”, The Mark 44 was actually not a Bomb by conventional sense. Considered a Kinetic Projectile, The Mark 44 was an Aerial Deployment Ordnance. First developed at the end of The Korean War in 1953, it saw service in the early phases of American involvement in Southeast Asia with it’s Military Advisors. A 300 to 509-pound Bomb, The Mark 44 was partially hollow. Inside, was 17,000 small machined darts. Each dart had multiple stabilizers. Exploded above a target, at varying heights – gravity was an important part of the weapon. The darts would fly in all directions and cause maximum Troop and Asset damage. The principle delivery system was The A-1 "Skyraider” Ground Attack Fighter. Used from 1961 to 1964, The Mark 44 would be replaced by the more effective M546 “Beehive” Shell (which was deployed by land). 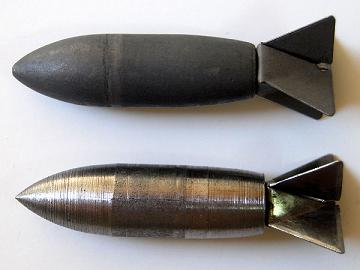