The Mark 17 Nuclear Device was a US Cold War Munition, deployed in 1954. The Class was considered (at the time), the largest Nuclear Device used by The US Military. So large, that on one specific Strategic Bomber could deploy them, The US Convair B-36 ''Peacemaker''.

The Device was 25-feet long with a diameter of 62-inches. The Device itself weighed 21-tons. These were ''Bullet Process'', gravity deployed Devices that were capable of detonating 15-MTs. The Mark 17 was classed as a ''City Killer''. Over 200 were produced. With the development of ''lighter'' Devices with more radioactive yield, The Mark 17 was recalled from service in 1957. 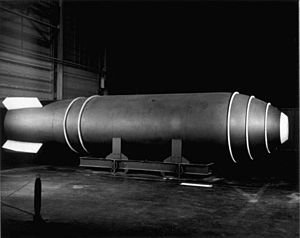