Deployed in 1942, The US Army M8 Motor Gun Carriage supported the 75mm Cannon. Over 1,700 M8s were produced for The War Effort in World War II. The Armored Vehicle was named for 19th Century American General Winfield Scott. Given to Armored Cavalry (Tank) Battalions as a form of “Scout” Vehicle, The M8 saw service In The Pacific and European Theaters of War. Later Models were sold to both France (1950s) and The Government of South Vietnam during The Vietnam War (1964 to 1966).

The “Scott” weighed 15-Tins and was 17-feet long. Crewed by (4) Men, it was a Twin Tracked Vehicle that was powered by (2) 4-cylinder Engines. The M8 could achieve a land speed of 36-mph. It was protected by 1.75-Inches of Armor Plating throughout. The primary Weapon System was The 75mm Gun. The Shell had a 5-mile effective range. It could support a wide variety of Ammunition types. It was supported by a single M2 .50 Caliber Heavy Machine Gun. 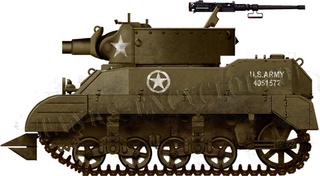