Nicknamed The ''Commando”, The US M706 was manufactured by The Cadillac Motor Company. It was a common Armored Vehicle deployed during The Vietnam War by The US Army Military Police as a tactical vehicle. It was one of the first designs used by The US Army which combined both the ability of a Light Armored Fighting Vehicle with the specifications of an Armored Personnel Carrier (similar to The US M113 APC). Deployed in 1962, The M706 weighed 8-tons. It was 18-feet long and 8-feet in height. It used (4) pneumatic, rubberized tires. The Engine was an 8-cylinder gas Chrysler, capable of 60-mph. Crewed by (3), The “Commando” could transport up to (9) Soldiers. Armament varied, with it's primary weapon being a 20mm Main Gun (Cannon). Carious Machine Gun variations could be deployed. It was a very popular Export Vehicle to NATO Allied, with 125 being given to The South Vietnamese Government. Although The M706 was very effective (3,200 were made), it saw limited use in South Vietnam. Despite this, many variants are still in use with many Police Special Weapons and Tactics Units throughout The World. 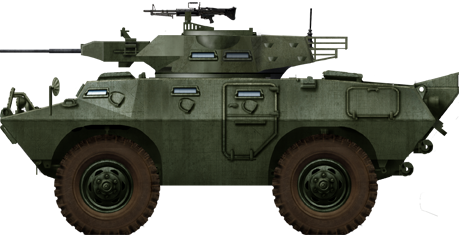