The “Arms Race” may have actually started towards the end of The Korean War of 1950-1953. As Communist Nations were obviously pursuing their own agenda in the development of Atomic Weapons, so too did America need to maintain a level of “superiority”. While it was becoming more and more clear to most, that the “Next War” would be “Nuclear” (and no doubt “fought” from The Air), the need for what was becoming known as “Tactical Nuclear Devices” became forefront. One of the first examples of a full-fledged Nuclear Artillery piece was the so-nicknamed “Atomic Annie”.

“Annie” was one of the largest US Artillery pieces constructed up to that point. It was specifically designed to chamber a tactical atomic artillery shell (280mm/11-inch). Weighing nearly 85-Tons, “Annie” was also 85-feet long and was crewed by roughly 8-Artillerymen. The maximum effective range of “Annie” (for her original Nevada Test Site trials), was 6.5-miles. At roughly 525-feet above “target”, her Shell (a Fission-Type), would detonate. The W-9 Designated Shell was a 15-Kiloton yield.

“Atomic Annie” (as were her official variant designate of Model 65) was only fired one time. Satisfied, The US Army ordered 20 such Models, with several stationed in Europe and South Korea. Considered a “Prestige” Weapon, it’s sheer size and time required to set up The Piece was a major issue. The Model 65 remained in US Inventory until 1963. At least 7 examples are known to exist in Military Museums. 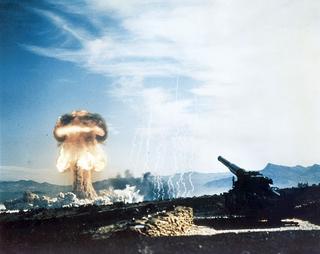