The M-6 Heavy Tank was a short lived Armored Vehicle produced in 1940 for The US Army. While The United States was not yet at War with Germany and Her Allies, many knew that such entrance into The Conflict was but a ''matter of time''. As such, The US Military needed a reliable Armored Tank for potential War. The US Ordnance Corps. developed The M-6 for immediate trials. The US Army had few Tanks and the development of such in mass numbers was tantamount. Delay dates involving modifications greatly hampered mass productions. In the end, The M-6 was replace by the quicker produced and fielded M-4 ''Sherman''. 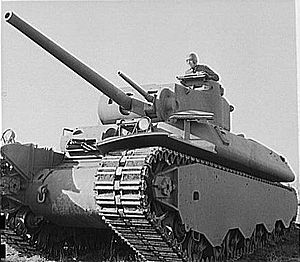