By definition, a Flack Vest – while still a Member of The Body Armor “Family”, is not in fact true Body Armor. The US Marine Corps. developed their own, The Model 1955 – in that year. These were large over garments worn as a jacket or vest would. A cloth or polyester Shell was filled with at first, ballistic Nylon. Later, Fiberglass “plates” were incorporated. A typical Vest weighed 10-pounds. The US Army devised their own as well. The Model 69 was almost identical. The only difference is that it had pockets on the front of the Vest Carrier. In theory, The Flack Vest (which devised it bane from a similar garment used by German Anti-Aircraft Batteries in World War II, did not  (nor was ever intended), to stop bullets. The primary goal was to protect against fragmentation explosives, related collateral debris and other low velocity impact weapons.

In some limited cases, The Vest stopped Shotgun rounds, but these were obviously “Scattershot” projectiles. Issued but the thousands to Soldiers and Marines in Vietnam from 1965 to 1975, they were quickly discarded by “Veteran” Infantry. The most common complaint was the heat and humidity of Southeast Asia was such, that heat related illness was caused by wearing a Vest along with all the other equipment. It was reasoned that wearing one made little difference with regards to life expectancy in The Jungle. Nonetheless, Flak Vests became the norm for Soldiers being deployed to combat zones or hostile zones well after 1975. Today’s version is made of both Kelvar and Ceramic Plating. 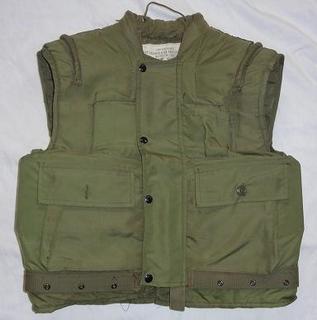