While One might think that the few photographs take of The M50 “Ontos” Light Tank are obviously an example of photoshop, the vehicle did in fact exist and was briefly deployed during The Cold War and the early phases of The Vietnam War. Developed in 1956 from The M56 “Scorpion” Cavalry Assault Vehicle. During initial testing, The US Army passed on The Ontos, but it was chosen by The US Marine Corps. Derived from The Greek word “Thing”, this was an apt description of the unusual design of The M50. The M56 chassis (which was a Twin Tread), was modified to feature a higher suspension. It could crew (3). The M50 was armed with (6) 90mm Recoiless Cannon – arranged in patterns of (3) on each side of the Chassis. It also featured a Browning .30 Caliber Machine Gun. The Ontos could fire selectively or collectively.

Capable of ground speeds of 145-mph, The M50 weighed 19,000-pounds and was 13-feet long. It stood nearly 7-feet tall and was 8-feet wide. Over 300 were manufactured for Marine use. The Ontos was used quite extensively during The Battle of Hue in Vietnam in 1968 for Urban Pacification. The M50 was phased out of Service in 1969. 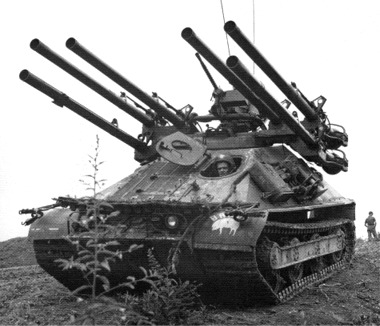