The US Quad Mount Machine Gun was a rapid fire, (4) barreled weapon introduced by The US Army in 1943. It was a self-contained Weapon which could also be mounted on a variety of wheeled and tracked vehicles. It's ability earned the dual nickname of “Meat Chopper” and “Krautmower”, by American Soldiers. It would remain in The US Military Inventory well into The Vietnam War of the mid-1960s. Weighing nearly 2,000-pounds, The M45 featured (4) 5-foot barrels which supported .50 Caliber ammunition. The bullets were fed by a series of (4) independently mounted containers next to each barrel. Each container held 500-round and The M45 could discharge over 2,000-rpm. It was crewed by (1) Gunner and several “Loaders”. As an Anti-Aircraft weapons, The M45 had between a 4,000 to 15,000 foot range. Although not traditionally envisioned as a “Anti-Troop” weapon, The M45 was used as such. It could elevated from 5 to 90-degrees.

During The Battle of The Bulge (1944), the greatest use of The M45 was seen – in use against The Germans. The primary bridge crossing at The Rhine (Oppenheim), The German Luftwafte determined that nearly 300-Warplanes would be needed to deprive The Allied of a passable crossing. Battalions of M45s were brought to bear against this tactic. Nearly 30% of German Aircraft were downed as a result of the deployment of The Quad Guns. The US Navy, late in The War – tested The M45 for possible use against Japanese Kamikaze attacks, but they were introduced to The Pacific Theater too late to be effective. As stated, The M45 was an early Air Defense weapons used against Communist North Korean Jet Fighters and were invaluable against NVA and VC Forces in Southeast Asia. 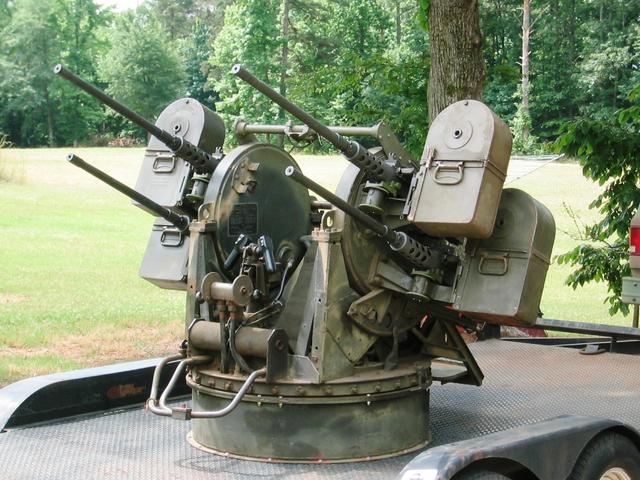