The forerunner of today's Standard issue Rifle Bayonet among US Forces, The Model 1942 (also known as The "M" Series) - was the eventual replacement for The Model 1917 Rifle Bayonet. Unlike it's predecessor, it was a true combination of Combat Knife and weapons component. Merging the successful Combat Stilleto with a less bulky (length) blade, The Model 1942 was 8-inches long, with an overall length of 14-inches. A Barrel Ring and slotted Lug attached the blade to the weapons barrel. The handles were originally wood, but were soon replaced by a plastic version (which lasted much longer. Blued or later "Blackened" steel, The Model 1942 was single edged. Carried in a nylon and plastic scabbard, it featured a hook for attachment to a Soldiers "Web" Belt. With slight variations, this blade was proven successful throughout most of America's War from 1945 to the present (with it's current incarnation, The M7 - the current issue). 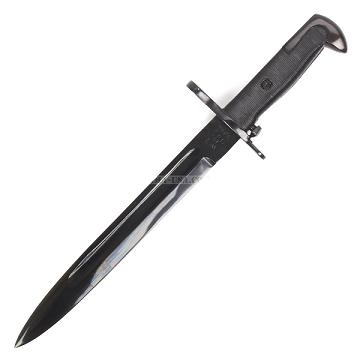