The US M-39 Armored Utility Vehicle was developed late in World War II (1945) and nonetheless saw service in Europe before the end of that Conflict (also that year). The M-39 would see most of it's service during The Korean War of 1950-1953. The Vehicle was modification of the existing M-18 ''Hellcat'' Tank Destroyer.

The M-39 was a focal point of The Battle of The Imjin River (1951), when Chinese Communist Forces stormed American position there (in an attempt to take The Capitol of Seoul). The Vehicles served as impromptu ''fortifications'' and used to slow the massive Chinese Infantry ''Wave Attacks''. After The War, most M-39s were sold to West Germany for use in their Army. Most were decommissioned in 1961.

The M-39 weighed 15-tons. They were 17-feet in length with a height of 10-feet. The Vehicle crewed (3). .5-inch Armor plating surrounded the entirety of the Vehicle. Dual tracked, The M-39 was powered by Continental 9-cylinder Radial Gas Engine. It was capable of a flat land speed of 50-mph with an operational range of 100-miles. Standard armament was the Browning M2 .50 Caliber Heavy Machine Gun, but other variants were known to exist. 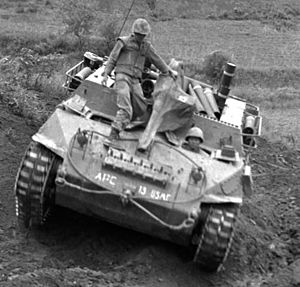