Named for famed Early American Pioneer and Hero Davy Crockett, the unusual US Army battlefield Device known officially as The Model 388, was designed for use on the purposed battlefields thought to have fought on – between The US Military and Communist Forces. The M-388 was designed specifically for a Second Korean War or War with The Soviet Union in Europe.

Designed for deployment by 3 Soldiers, The M-388 was in actuality a Spigot Gun (long in use by Allied Forces during World War II. Modified to support a low-yield Atomic Device, The M-388 could propel a 10 to 20-Ton Atomic charge up to 1.5-miles. The Atomic Device weighed in at slightly over 50-pounds. Noted for rather “poor” accuracy, nonetheless – The “Crockett” was tested in 1962, during the series of last Atomic Weapons Tests conducted by both The United States and The Soviet Union (The Nuclear Partial Non-Proliferation Test Treaty). In addition to a Tripod Mounted Version, a variant which was Mobile (The M29), was actually a modified M-113 Armored Personnel Carrier

Over 2,000 “Davy Crockett’s” were produced and kept in US Inventory, starting in 1956. Many Models were deployed with US Army Forward Forces still station in West Germany and other NATO assignments in Europe. The last M-388 were deployed to 2 specially trained Units of The 82nd Airborne Division in 1968. These 2 Units were deactivated later that year and The M-388 was declassified and removed from Inventory.

West Germany strongly requested that NATO make available all still serviceable M-388s in the 1970s – to be used as a Soviet deterrent. However advanced in Nuclear Delivery Systems (both Field and Air Assets), made their request for deployment impractical. (8) known survivors are current on display in Military Museums throughout The United States. 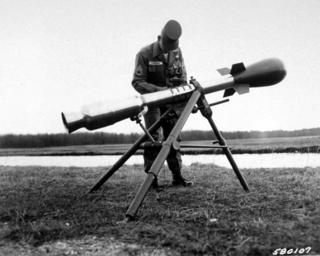