Unlike it’s predecessor The Model 15, The Model 34 was a refined version of the Phosphorus Grenade. Design to destroy unserviceable Military Equipment (Tanks, Vehicles and Aircraft ). The Grenade used a White Phosphorus chemical compound. This was a semi-solid, translucent waxy substance that reached violently when exposed to air. The result of this interaction was instantly combustible. The average rate of heat was 1,200-degrees Fahrenheit.  This allowed The M34 to burn through 6-Inches of steel within 2-minutes. Casing color was traditionally Lavender, to better identify them from other Grenade types. Due to their volatile nature, they were normally not carried by the individual Soldier.

Phosphorus Grenades were not new by the time of The Vietnam War. Examples were experimented with during World War II. Nicknamed “Willie Pete” by American Soldiers in Southeast Asia, it was never supposed to be used as an Anti-Personnel weapon. Unfortunately, many American Soldiers had a “blurred” outlook on The War by the late 60s, and it was used as such. Used during “Search and Destroy” Missions, The Model 34 was used to destroy suspected Enemy weapon caches.

Activation was achieved by a traditional Pull Pin, which triggered a Slow Fuse  (timed first 5-seconds). The blast radius was roughly 6-feet. The Grenade was shaped in a semi-conical shape, to facilitate the downward spread of the Phosphorus compound. Versions of The White Phosphorus Grenade are still in use by Military's throughout The World still. 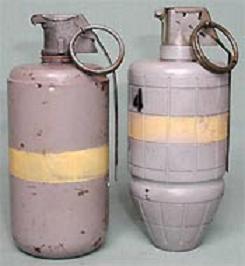