Nicknamed "The Grease Gun" for it's resemblance to a mechanic's tool used for lubrication of automobile parts, The M-3 was developed in 1943 as a cheap, yet effective rapid fire small arm (seen by some as a replacement for The Thompson). Inspired by Britain's Sten Gun, The M-3 was Machine stamped with very few working parts. It featured a retractable metal stock and fired a 30 rounds straight clip magazine. Weighing 8-pounds, it was blowback operated and capable of cycling 450 rounds per minute. The M-3 had a 100 meter effective range. Over 700,000 were produced. Later versions were also chambered for 9mm rounds. The M-3 was designed for Infantry use, and saw some success in The Pacific Theater of War. The M-3 became more popular among Tank crews and Airborne Troopers. A common issue with use was dirt and debris effecting the firing components. Coupled with the cyclic rate of such large rounds (.45 ACP), jams were common. The M-3 was manufactured by The General Motors Automotive Company (as their contribution to the War effort).
The M-3 was maintained in The US Army's Arms inventory until 1992. 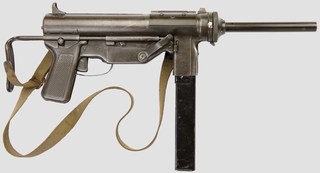