The Model 24 “Chaffee” was a Light Armored Tank, designed and deployed late in World War II. They were first used as Scout Vehicles during The Battle of The Bulge in 1944. The M-24 was used heavily during The Korean War by The US Army. Popular, The “Chaffee” was sold to other European Armies, and was deployed in great numbers by France on Southeast Asia during The Siege of Dien Bien Phu. Large numbers were also sold to The Army of The Republic of South Vietnam. The M-24 weighed 10-tons and was 10-feet long and 10-feet wide. Built by The Cadillac Company, it used an 8-speed, 220-HP Diesel Engine. As a Twin Tracked Vehicle,  it featured 7-support wheels. The Tank was capable of 35-mph. It featured .060 to 1.50-inches of Armor Plating. Crewed by 5, The M-24s armament included it’s 7mm Main Gun, with a maximum range of 2,100-yards. This was supported by a .50 Caliber Browning Machine Gun and (2) .30 Caliber Brownings. The “Chaffee” was heavily deployed by The ARVN throughout it’s existence. It’s best remembered deployment was at The Battle of Hue City in 1968. 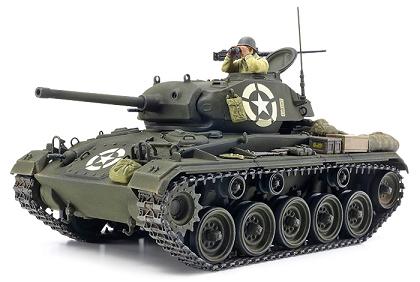