Designed to replace the aged World War II M1 Flame Thrower Device used by The US Army, The M202 FLASH (Flame, Assault, Shoulder), was a combination weapon. Developers wanted to remove the often dangerous chemical used in The M-1 and the often hazardous electrical ignition system. The initial design of The M202 was a box-like Device made of lightweight plastic and aluminum. The device was compartmentalized to include (4) launching enclosures. In operation, (1) to (4) 66mm Rockets could be launched at a specific target (structure or personnel). Each rocket carried TPA (Thickened Pyrophoric Agent) Compound. This paste-like chemical (often mistaken for Napalm Jelly), was more stable.

The M202 weighed 26-pounds fully loaded. Each fired projectile ranged from 200 to 800-yards maximum range. Conversely, each rocket traveled at 375-feet per second. The rocket compound of TPA, when exposed to human skin, mimicked nuclear radiation burns, due to the extremely high temperature level produced (over 2,000 degree F). Another use for The M202 was it's ability to augment the M72 Light Anti-Tank Weapon (LAW). It too used a 66mm Rocket for Armor penetration. Die to the M202 ability to chamber and launch the same round, this allowed it to become a ''Tank Hunter'' as well (with a 4 shot ability over the standard one).

Deployed with an Infantry Platoon, The M202 stood a 50% shot hit capability. This was seen as optimum. Used late in The Vietnam War, The M202 was seen as a comparable match with The M72 (but not a replacement). A variant is still deployed with US Military Forces today. 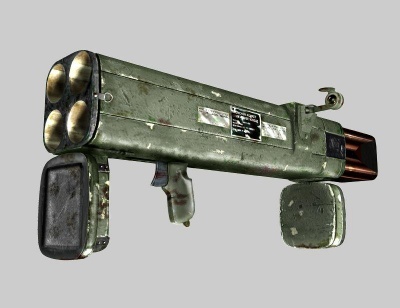