The US version of The ''Bangalore Mine'' was based on the 1912 British type – originally developed by The British Royal Engineers, as a means of clearing possible unexploded ordnance and clearing paths for soldiers and materials. The original device was seen as a means of allowing a Sapper the ability to place the device (at distance), without exposing himself to immediate danger. The often misunderstood nomenclature of ''Bangalore'' developed not from The Indian Army, but rather from The City of Banglaore (in which it's inventor was stationed). The early version of the device was used in World War I, but seldom for clearing wire obstacles (as would be thought). Their true use would be seen in World War II (with American redevelopment of the munition).

The M1A1 (nicknamed ''Torpedo'' by Allied Forces) was a series of 5-foot steel tubes (roughly 2-inches in width) and weighing around 13-pounds (9 of which was the weigh of the TNT explosive). The tubes featured a threaded end on both top and bottom. This allowed another section of tube to be screwed into place. Normally no more than (3) sections were connected. At the top end, a rounded Cap was placed prior to use. This helped stop snagging by obstructions. At the end, the detonating section was placed. This portion was sealed with a lanyard or pull cord. This cord would activate a firing pin/blasting cap assembly.

The soldier firing the device, would push from under cover, the sections of tubing forward – normally up against an obstacle (such as a hedgerow or related). Upon pulling on the cord, the device would detonate, creating a 15-foot (outward) explosive crater with a 3 to 6-foot width of destruction. The M1A1 was very effective during it's deployment with Allied Forces during The Normandy Invasion of 1944. So effective, that The ''Bangalore” continues to be used (in form), by many Military Combat Engineering Forces throughout the World, even today. 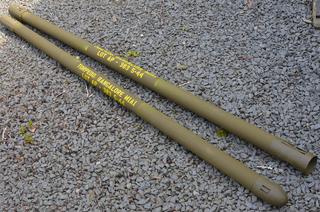