As previously discussed, the use of flame projection devices in warfare is not a new invention. Going back many thousands of years, the first viable "battlefield" version  was pioneered by Imperial Germany in World War I. Britain soon followed with similar large scale devices as well.

The theory was sound enough that other Countries began to experiment with Models, with the United States developing the first reliable version between 1940-1941. The M1A1 Flamethrower was a two-man, flamethrowing device. Weighing 70-pounds, The M1A1 use a combination of Napalm and Nitrogen under pressure.

Composed of three metal tanks, the Napalm substance (highly flammable substance), was placed in two tanks, with pressurized Nitrogen in a third. A series of rubber hoses connected the two substances. Forced into a component nozzle which resembled a pistol grip, a battery powered spark ignited the pressurized substances in a flaming projectant.

The maximum range of The M1A1 spray was 141-feet, by the weapon was more effective at ranges of 70-feet. Although used in Europe (Normandy Invasion), The US Military saw greater results in The Pacific Theater of War. Used against fortified defensive Enemy positions, underground fighting constructions etc, it was very effective and fatal.

Generally, The M1A1 could carry up to 5 gallons of chemical. Although deployment procedures involved two-men, they were often used by one-man. Nicknamed "Zippos" (after the hand held cigarette lighting device), it was considered a very dangerous "Occupation". One well placed Enemy bullet or shrapnel, could detonate (and incinerate), The User. 3 variations were developed, with versions being used by US ground Forces well into the 1960s. 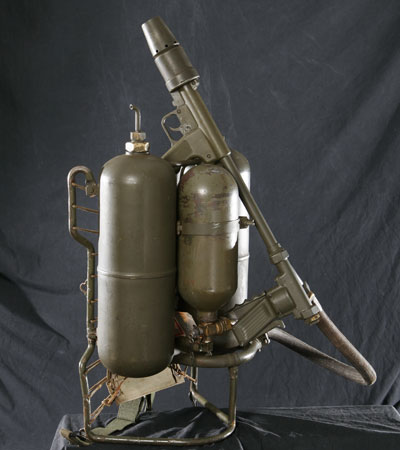