The M197 Electric Cannon was a weapons system developed by The US Army to improve upon the then new in-service M67 ''Vulcan'' 20mm Machine Gun. As previously discussed, The M67 was a relative of the 19th Century Gatlin Gun, which involves 5 to 6 rotating Gun barrels. The M67 used the larger 20mm round and could fire in bursts, over 1,000-round per minute. This led to The ''Vuclan'' being mounted on modified M113 APC and thus was created a mobile Air Defense Battery.

With the full deployment of The UH1 ''Iroquois'' (aka ''Huey'') Helicopter for transport and close ground support in the early phases of The Vietnam War (1965), attempts were made to mount the M67 system on these aircraft. Weight issues created problems, with only a few prototypes being deployed.

Next, The US Military modified it's then new M60 Machine Gun for helicopter deployment. Sing mounted guns (inside the main craft cabin) – meant that a Gunner (again inside), had to fire the weapon. Later, a modified version of mounted dual and quad guns (M60D), was attempted and used.

With the development of The AH1 ''Cobra'', it was determined that the M67 system was not viable. Hence the M197 Electric cannon was created. The system, which was mounted underneath the aircraft front nose fixture, featured (3) 4 to 6-foot barrels. These did not rotate as did The Vulcan. Fixed as such, the Pilot controlled the systems via electrics, which allowed the turret pod to traverse left of right. Any elevation of fire had to be accomplished by rotation of the aircraft.

The M197 could produced up to 1,500-rounds per minute. Thus mounted on The ''Cobra'' (deemed ''Gunships''), they became an effective and deadly tool in close ground support for US Military personnel.

Variants of The M197 are still in inventory with The US Military, with original versions still in use by other Countries. 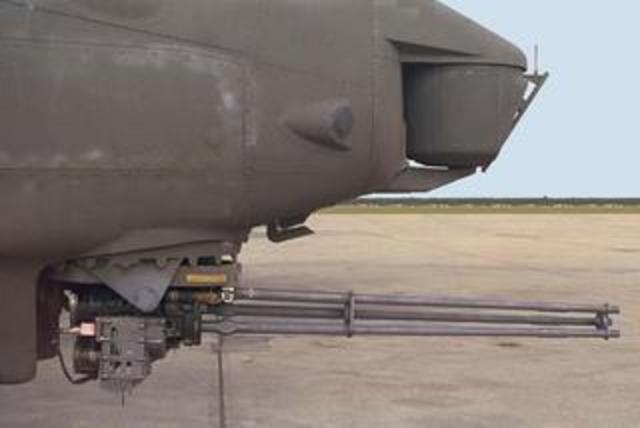