Developed late in The War, The 1918 Ford Tank was nonetheless a popular battlefield weapon in Europe. Based in part on the British Mark VIII Tank, The US Army approached The Ford Motor Company as their primary Manufacturer and Producer. Ford had revolutionized the Factory Production Line System. Using Ford Model T components, they produced 100 3-Ton Tanks pet day! The Ford Tank used two Model T engines in tandem for propulsion. This gave it an 8 mph battlefield speed. The Ford had 3 speeds (2 in Forward and 1 in Reverse). Overall length of the Tank was 13 feet long, 5 feet wide and 5 feet tall. The Ford was crewed by 3 men. It's primary weapon was a .30 cal. Turret mounted Machine Gun only. Over 15,000 Ford Tanks were ordered and delivered to France for use on The Western Front. It was also used after the War as a Trainer in The Army Tank Corps. - with many eventually being deployed with many Army National Guard Units (well into the mid-1930s). 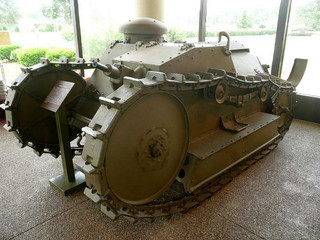