Developed and deployed late in The War, the Model 1918 7-Inch Gun was a first attempt at a Self-Propelled weapons system (that would eventually become the norm in most Modern Armies). Artillery in World War One was cumbersome. Large Wheels and extremely heavy gun barrels – coupled with harsh battlefield conditions – made movement of these weapons difficult. Often, modified Tractors were implemented to “tow” a Gun to it's desired position. As a “Self-Propelled” Systems, a Track system was developed and incorporated into the Gun. This allowed a “Driver” to move much heavier guns with much ease. The 7-Inch Gun was considered a Medium Weapon. Developed by the famous Dahlgren Company, the Gun had a 19 to 25,000 yard effective range. It was capable of firing a 152-Pound Shell (solid and fragmentation). 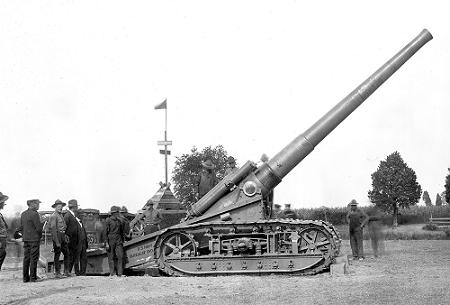