US M18A1 Claymore AP Mine

Developed in 1952, The US Model 18A1 Anti-Personnel Mine (nicknamed “The Claymore”, after The Scottish Great Sword of The Middle Ages), was used by American Military Forces, during The Vietnam War. The Mine was a directional fragmentation explosive which used a Composition Number 4 compound which contained 75 to 120 .00 diameter Steel Ball bearings. The Mine was electrically activated. Standing 5-inches tall and 8-inch especially wide, the entirety of The Mine was made of a plastic housing. This was seen as ideal for the hot and often wet, jungle climates indicative of Southeast Asia.

In practice, the C4 Compound weighed just 3-pounds and was fired by placing two blasting cap fuses through twin holes in the top (which connected directly into the Compound). A series of wire leads would be extended outwards 200-meters). From a relatively safe distance undercover, the leads connected to a firing actuator called a “Clacker”. A series of quick pressure closures with both hands, set a electrical charge to The Mine, detonating it.

Able of causing extreme damage, the kill or blast radius was 50 to 200 years in a fan-like destructive cone. The Claymore was one of the most effective Explosive devices used in The War, they could be deployed in a broad varieties of terrains (mud, trees and even buried). Varieties of The Claymore are still used by US Military Forces, even today. 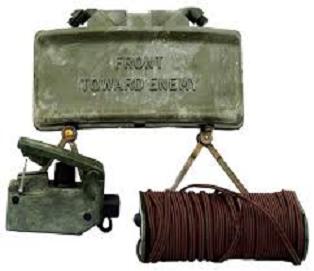