One of the few times in early US Army History, that they actually issued a knife for Service use, The Model 1880 was developed for use with Infantry and Cavalry assigned to The American West  (The Plains). Sometimes referred to as a “Hunting Knife”, it featured several unusual characteristic. First, the blade was 9-inches in length and close to 4-inches in width. It was double-edged and featured a slender, Pommel twist Grip. The Knife was carried on the waist  in a large leather with brass riveted Scabbard. In most cases,  Soldiers procured their own knives for use, with the previously discussed Bowie Knife the obvious choice. It was this blade that gave the idea to The Army to reproduce a similar type. Used as an “all-purpose” blade, capable of skinning prey and a variety of other tasks, The Model 1880 was highly regarded by Soldiers. It was also considered a more effective combat blade. A staple of the late American Indian Wars, it would continue as basic issue until the 1890s. 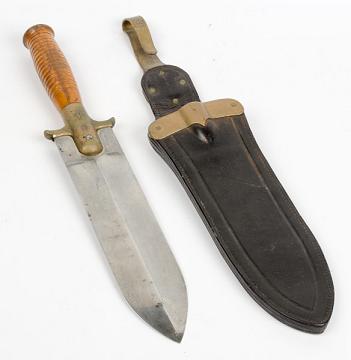