Also known as The ''Honeycomb'' for it's many rocket tubes resembling the face of a Honey Bee Hive, The M166 Multiple Rocket Launcher was developed late in World War II for use by US Military Forces. Several Batteries were deployed and used just once before The War ended. The System was adopted for use more by The US Marine Corps. - who maintained it in their Arsenal until 1954. The System deployed The M16 Rocket, which was a 110mm solid fueled munition. Each Round fired from a multiple launch system of 4.5-inch tubes (joined). (21) such tubes could be fires at once, making The M116 a form of ''Volley'' Weapon. The System had an effective range of 4,800-yards.

The System weighed several hundred pounds and was mounted on a wheeled axle. Standard small wheeled utility vehicles or Medium Trucks were used to transport. A Crew of (6) Soldiers were used to load and fire The M66 (which was done electrically). A variety of ammunition types could be used to exploit Enemy Personnel and Armor. At the start of The Korean Conflict in 1950, all M166 Batteries were deployed to The Philippine Islands for deployment against North Korean and Chinese Communist Forces. The System became one of the most widely used small rocket artillery systems of that War. 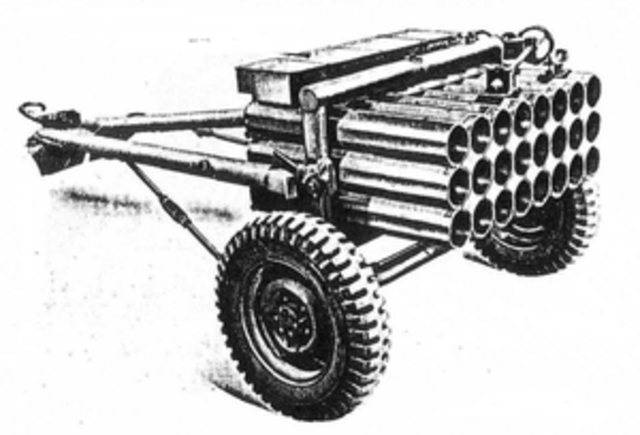