First deployed in 1942 during World War II with American Military Forces, The M114 Field Howitzer was the primary Field Artillery piece of The Vietnam War. Variants are still in use today. Weighing over 12,000-pounds, the 12-foot tube is mounted on a Split steel Carriage/Cassion. It is wheeled for ease in transport. This design helps stabilize the piece during firing. It requires a Crew of 11 to deploy the 155mm (6.1-inch shell). Brass cartridges are 2-feet. The M114 has a cyclic rate of 40-pounds per minute, due to a hydropnematic system.

It can elevate up to 60-degrees and traverse 25-degress left or right. Typically, a shell can travel from 1,800-yards to 16,000-yards. During The Vietnam War, The M114 was arranged in 8-gun Batteries, and were the principle “Fire Support” weapon for Front Line Infantry Units (as well as Support for other Services). They were first deployed during The Battle of The Ia Drang Valley in 1965. Although replaced as a primary Gun, variants of The M114 are still in use today in The United States as both a Training Piece and with The National Guard. In addition, several World Armies deploy The M114. 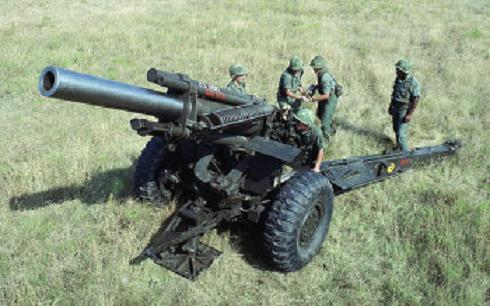