Developed in 1962 for The United States Army, The Model 107  175mm Self-Propelled Gun was one of the largest Guns deployed by The Army during The Vietnam War. Designed as a long range Fire Support weapon, The M107 was deployed primarily to The Central Highland Region of Vietnam. The M107 design was based off of The M48 “Patton” Battle Tank. The Chassis had it’s Turret and Main Gun removed. A modified Gun Barbette plate of 2-inch Armor was installed, with modified hydraulic springs to assist with recoil. The M107 featured an auto-loading mechanism for the 175mm Shells. An extending secondary pair of shock absorbing Rear Pawls, were used to help absorb recoil and allow for stabilization.

The M107 featured a 60-foot traversing Barrel which could elevate to 180-degrees. The Gun had a 25-miles range. Crewed by 5 (but capable of emergency transport of an Infantry Squad of 13), The M107 was a tracked vehicle which featured 5 support wheels. It used a GM 8V71T Supercharged Diesel Engine (8 cylinder). On flat surfaces, The M107 could achieve 50-mph. The M-107 weighed 30-tons and was 40-feet in length. They were 10-feet wide and 17-feet tall.

The Armor protective plating of the Chassis was Aluminum based, and ranged from 1 to 2-inches. This proved to be an issue, due to the effective use by The VC of The Soviet Rocket Propelled Launcher (RPG-7). Of the 109 deployed in The War, 30 were lost or severely damaged. As a Fire Support weapon, The M107 was deployed in Batteries of 4 to 6 Guns. Targeting and correction of Shells fired, was by Field Observation at Target location  - relayed via Radio. After 1971, The Army discontinued production of The M107. Many surviving Guns were exported to other Foreign Armies, with some still in use today. 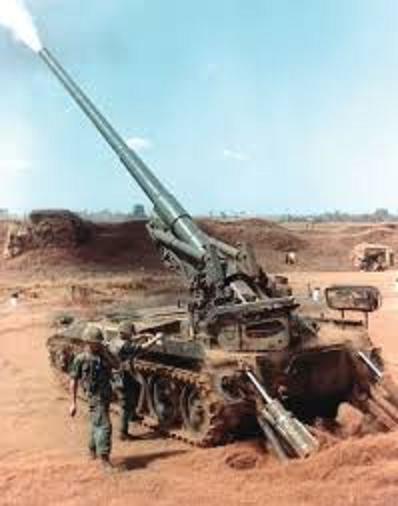