Developed for War in Southeast Asia by The US Army, The M106 was a mechanized Mortar Carrier. It was a tracked Vehicle which supported The US M30 Heavy Mortar as well as several other commonly deployed Mortar weapons used by The US Army in the 1960s. Designed by The FNC Corporation, The M106 weighed 12-tons. They were 16-feet in length with a width of 10-feet. The Vehicle height was 7-feet. Predominately made of Aluminum (1.5 to 2-inches), The M106 used a Diesel Engine capable of 210-HP. They had an operational range of 250-miles.

In addition to it's Mortar (of which only 1 was installed), The M106 carried (1) Browning .50 Caliber Heavy Machine Gun. (6) Crewman – to include Driver, were assigned. Several variants were fielded during The Vietnam War (1965-1975). Somewhat effective as a Close Support (Infantry) weapon (despite the often thick jungle terrain), The M106 remained a Mortar Platform with The US Army until 1988. 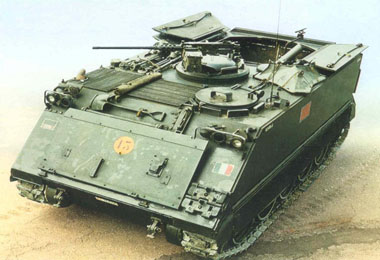