With little changes to it’s basic design since it’s inception with US Military Forces, The US Model 1 Helmet was the standard protective headgear issued to American Armed Forces (and was standard during The Vietnam War of 1965-1975). Made from a single piece of pressed steel alloy, The M1 featured a smaller inner piece known as a Liner. Liners were constructed of fiberglass and designed to aid in proper seating (or fit). A leather head strap was attached to this which could be adjusted. A cloth, reinforced Chin Strap was also included for stabilization.

Not outer covering made of camouflaged cloth was fitted on The M1, upon which was pre-cut various small slits. Into three could be placed pieces of organic matter to create a concealed appearance when suitably hidden in deep foliage. The nickname of “Steel Pot” was an affectionate term applied by US Soldiers, which actually goes back to World War II and The Korean War. Due to it’s two-piece construction,  the Steel portion made a serviceable cooking pot for preparing food. The M1 provided good protection against fragmentation explosive devices and shrapnel. It also provided concussive protection as well.

A common practice among Vietnam War Soldiers was the “Marking” of the camouflage covering with inked political or Military phrases and drawings. The later Period of the 1960s-70s, was fraught with much dissenting feelings in America as to its involvement in Southeast Asia. As a mirror of this, many Soldiers expressed their feeling this way. Frowned upon by Commanders,  most did not enforce stopping it. The M1 also became an “extra pocket” of sorts. The Helmet had a rubberized band which coveted the entirety of the perimeter. Often, Soldiers would keep Gun Oil bottles, cigarettes and even spare ammunition clips, pressed against the Helmet. The M1 was eventually be replaced in the 1990s, but many Nations still use it in their Armies as headgear protection for their Soldiers. 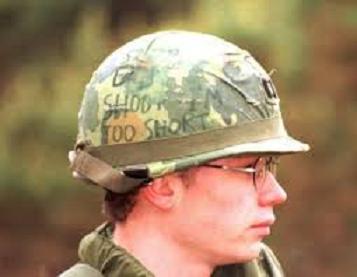