Considered to be the first operational Jet Fighter of The United States Army Air Corps in World War II, The P-80 ''Shooting Star'' was first developed in mid-1943. However, initial costs prohibited deployment until early 1945. The P-80 saw limited combat service in Europe, mostly over Italian skies. Incorporating Turbojet technology, The P-80 was considered the beginning of The ''Jet Age'' for military technology. It would serve as the platform for some of America's earliest and best Jet Fighters – such as The F-86 ''Saber'' and F-94 ''Starfire''.

The P-80 saw extensive service in The Korean War of 1950-1953. It was somewhat outclassed by The Soviet MIG-15 Fighter Jet. It did not fare well in early Jet ''Dog Fights''. It was replaced by The F-86 ''Saber'' and it's variants. Despite this, The P-80 saw extensive service as a Jet Trainer for the US Air Force (created in 1947), and would become a staple fighter for many foreign nations Air Forces. Although the last P-80 was retired in 1997, some smaller Nations still maintain them in their inventory, a testament to a superior early Jet Fighter. 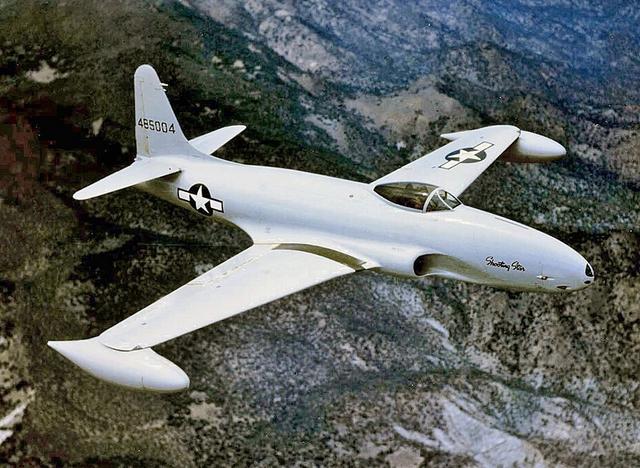