Many were sent to Great Britain in 1942, where their speed earned them the nickname, The "Lightning". However, The US Army Air Corps. was not pleased with over all air combat maneuvering. Several Squadrons were deployed to The Pacific Theater of War against Japan, but they were primarily a European Theater Fighter. The initial problem was with The P-38 not having powerful enough engines. Great Britain corrected this problem and The "Lighting" became a lethal adversary to the German Luftwaffe. Production of twin boomed Fighters stopped in 1945. Several Squadrons were still maintained by British into the early 1950s. 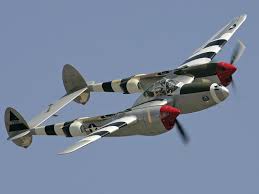