The ''Little Joe'' was a US Naval Munition designed for World War II service. The War ended before actual combat trials could be made. Only (15) of The KAN were produced. Initially, The ''Little Joe'' was developed to counter The Imperial Japanese Naval tactic involving ''suicide'' aircraft – or ''Kamakaze''. The KAN was a Point Defense weapon that required little to target – but with a massive explosive ability to destroy an Enemy aircraft in air.

Launched from the Deck of a Warship – via a launch rail system, The KAN weighed over 1,200-lbs (100 of which was HE in the Warhead). A proximity fuse was the primary source of detonation. The KAN was 12-feet long with a 22-inch width (diameter). Stabilization fins (7-feet) helped in flight with it's (4) Booster Rockets. The KAN had a 2.5-mile operational range. After The War, The Navy briefly though of keeping The Program going, but canceled The KAN in 1946. 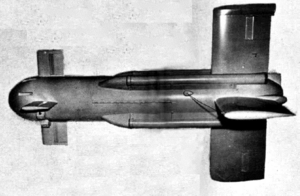