Developed for use by Kaman Helicopter in 1959, The SH-2 ''Seasprite'' was placed in operational deployment with The US Navy in 1962 – as part of it's Carrier Based Aircraft Assets. It's primary Mission was the rescue of downed US Pilots from sea and land crashes. Of it's Vietnam Service Record, of the 268 Missions performed, 103 successful rescues were made. Many SH-2s were converted in the 1970s ''Cold War'' in Anti-Submarine Platforms, and were used as late as Operation” ''Desert Storm'' in a counter electronics warfare role (owning to the non-existence of Enemy Submarine activity). The Class was retired in 2001 (although variants still exists in other National Services throughout The World. Crewed by (3), The '”Seasprite'' can support (1) recovery Subject. They are 40-feet in length and 14-feet in overall height. Primary Rotor diameter is 45-feet. Power is supplied by Twin GE T58 Turboshaft Engines. This allows for a maximum weight of slightly over 12,000-pounds. Fuel capacity was rated at 400 US Gallons.

Operational ceiling was rated at 22,500-feet, with an average airspeed of 165-mph. The SH-2 could be maintained in flight for 5-hours. Hovering was maximized at 16,000-feet. Typically, as a primary Rescue Craft, ''Seasprites'' did not carry air to ground weaponry within The US Navy, although later in The Vietnam War, M60D 7.62mm Machine Gun (single barrel) Systems were mounted on one of the Exit Ports (the other being needed for the Litter Retrieval Systems. When later used for ASW, The SH-2 supported both Sonar Buoy Packages and and the ability to launch (2) Mark 50 Torpedoes. Other Countries have fielded various AGM Systems. 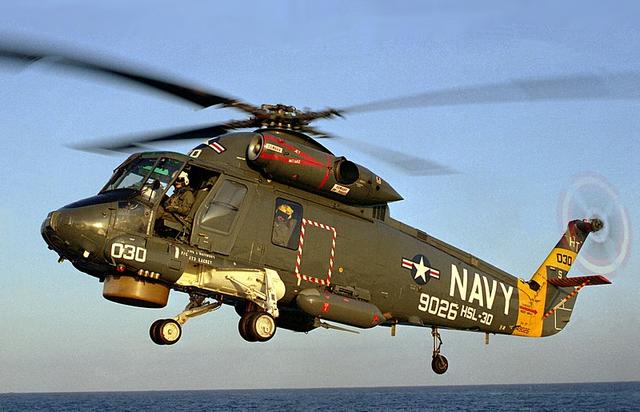