Considered the Modern equivalent of The “Sawed Off” Shotgun, The US Military designated Model 37 was designed by The Browning Firearms Company in 1933. It was based on “lessons learned” in the Trench Warfare of World War I. Although some use was seen in World War II and The Korean War, The M37 was more well known in The Jungles of Vietnam. The M37 was a popular close quarters weapon, seen as ideal for “Jungle Fighting”. The unique Shotgun featured no rear Stock assembly, but a reinforced high-impact plastic Pistol Grip (some were rubberized). This allowed for maximum control by The User, especially considering the massive 20-Gauge Round, often set at maximum spread or “Choke”.

A tubular magazine could feed 5 to 8-Rounds of various types of ammunition (from “Bird”or Scatter Shot to Solid “Ball Shot”). The M37 was a hand operated (pump action) Firearm. Barrels ranged from 13 to 30-inches. The maximum effective range of The M37 was roughly 100-feet. Variations of The M37 were also adopted by many US Law Enforcement Agencies, with The Los Angeles Sheriff's Department being among the first to use them in the early 1970s. 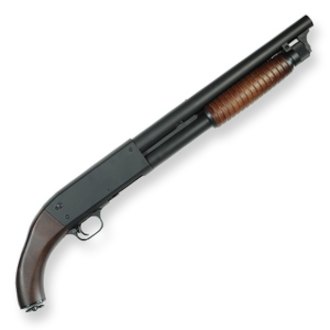