Although the Holt Gas Electric never saw combat service on the battlefields of World War I, it was nonetheless an innovation in Armored Vehicle technology. The first prototype built of a marriage between the 2 Companies General Electric and The Holt Company (later to be known as Caterpiller Tractors), The Holt Tank was designed in 1917. Designed for 6 crewmen, The Holt was 7 feet tall and 9 feet wide. At 25 tons, The Holt also featured 1.5 inches of armor plate. Equipped with a 90 horsepower electric generating engine, The Holt was designed to make 10-miles per hour. Armament included a 75mm Vickers Howitzer Main Gun and 2 mounted M1917 Browning 7.62mm Machine Guns. The primary problem with The Holt (and the reason it was never put into mass production) was that the engine constantly overheated and caused the vehicle to shut down. 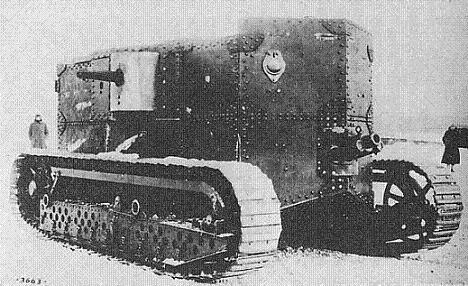