A ''Glide Bomb'' developed by The US Military during World War II – the aptly nicknamed ''Grapefruit Bomb'' (for it's bulbous Nose Cone appearance), was first produced in 1943. The GB-1 used a gyro-stabilization system to ''fly'' (radio controlled) a 2,000-pound Bomb on a precision targeting attack. The GB-1 saw most of it's operational history in Europe attacking reinforced German Munition Plants. Over 1,000 GB-1 Devices were produced for The War Effort. The Bomb featured a 12-foot wingspan and could be controlled for up to 20-miles. The average speed of The GB-1 was 230-mph sustained. Although The US B-17 Bomber was the aircraft of choice as an operational platform, experiments were conducted to adapt The GB-1 for Glider use (but this was by and large unsuccessful). Deployed originally with The US 8th Air Force, over 90 of the 1,000 deployed were shot down by German Air Defense Gunners (who often mistook them for Allied Fighters). Due to this, by 1944 – The 8th decided to stop using The GB-1 (although it was still used by other Major Commands until 1945). 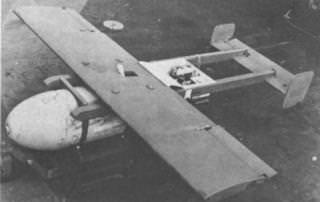