Invented in 1874 by William Gardner (Ohio/US), he based his experience in The American Civil War as an infantry and the need for an infantry support weapons that was reliable. Based in part on the popular Gatlin Gun, The Gardner fired a .45 caliber round from a drum barrel system. Hand-cranked and gravity-clip fed, the Gardner also sat on a tripod stand. Weighing in at 150-pounds, it was considered a crew served weapons. US Army tests of 1874, showed that The weapon fired some 10,000 rounds in 20 minutes. Subsequent tests in 1875 and 1880 still left The Army not impressed. The British Navy arranged tests with Gardner and were so impressed that they purchased the manufacturing rights. The British Army followed suit and built around 500. They were used in The Sudanese Wars of the late 1880s. Due to severe environmental problems with sand jamming up the mechanism, The Gardner would be phased out of service. 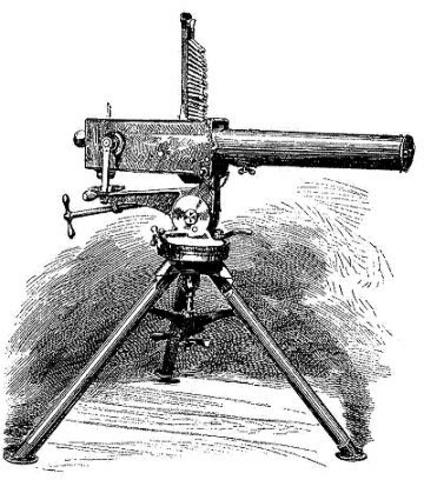