The unusual firearm known as The ''Liberator'' as a US weapon used during World War II. The handgun was never carried by US or Allied Forces and was intended for use by Resistance Forces throughout Europe. By way of distribution, The ''Liberator'' served an unintended psychological goal against German Forces. The FP45 was a hand held, all metal (stamped component) weapon. It was ''shipped'' in 23 pieces, which could be easily assembled by following a set of printed illustrations (hence no need for multiple instructions in different languages). The ''Liberator'' was stripped of all identifying parts linking it to either The US or any Country of origin (so it could not be traced if a Resistance Fighter was captured).
The FP designator was also part of the weapons disinformation production. Meaning ''Flare Project'', this was to further confuse German Counter-intelligence.

The ''Liberator'' fired only (1) shot at a time, with subsequent rounds of .45 Caliber ammunition being stored in the handle of the weapon (5 in total). The weapon had an unrifled barrel, which severely limited it's range to less than (4) feet. The ''Liberator'' was seen as a close range, anti-sentry weapon. Hundreds of thousands were airdropped into occupied Territories for use by Resistance Forces, but many were captured by German Forces. This had the unintended effect of giving them advance knowledge that anyone in Occupied Territory could be carrying a Liberator. This created much concern with Sentries and other Soldiers (especially Officers). For all it's development, most Allied Commanders did not like The Liberator. Many stalled distribution, with many intended for Europe being diverted to The Pacific Theater (where they were also stored, unused). It is estimated that over 1 Million Liberators were produced between 1942-1945. 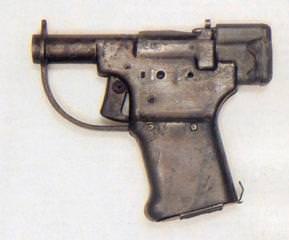