The Fisher Aircraft Company’s P-75 ‘’Eagle’’ was an early World War II Fighter designed as a high-altitude, high performance Aircraft for used by The US Army. (14) Eagles were built, with first flights in 1943. However, when US Military and Allied objectives changed, the need for such a Fighter stopped, with no further Production Models made. None ever saw combat. Crewed by (1), The P-75 was 40-feet long with a wingspan of 50-feet. It was powered by a single Allison 24-cylinder Engine, which produced 2,885-HP. Rated airspeed was 435-mph. Operational ceiling was 37,000-feet. Ordnance was rated to (6) .50 Caliber Machine Guns (wing mounted) with an additional (4) .50 Calibers fuselage mounted. The P-75 would also have supported 1,000-lbs of Bombs. 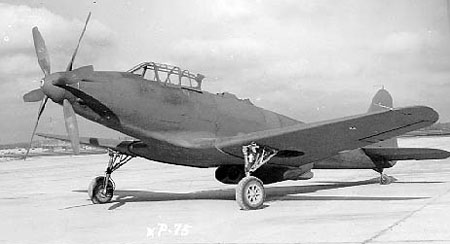