While their odd name could have many meanings, this US Army World War II Fighting Unit was officially known as The 1st Demolition Section. They were a part of the famed 101st Infantry (Airborne) Division (known for their part in The Normandy Invasion of 1944). Their ''story'' became legendary (of sorts), thanks to Hollywood.

The little known Unit (of 13 Soldiers), served as the basis for the American 1967 War Film called ''The Dirty Dozen''. In the film, an unorthodox US Army Officer is given the Mission to infiltrate German Lines and attack a ''Recreation Lodge'' full of off-duty German High Command Officers (with the goal of assassinating as many as possible). He recruits 12 Army Prisoners (awaiting death sentences for a variety of crimes). Feeling that they have ''nothing to lose'', they are trained as Commandos and given the task. They are undisciplined and somewhat dangerous, but effective Special Operators.

The unlikely scenario was based in part on The 1st Demolition Section, or The ''Filthy Thirteen''. The soldiers in The Section were well known as being notoriously unwilling to follow orders and were ''terrible soldiers'' with regards to basic military discipline. However, they were some of the best in demolitions and covert operations. Even their Leader, Jake McNiece – was a ''ramrod''.

The Detachment also helped foster the incorrect imaged of The 101st Infantry. Many Civilians were drawn to the fact that The Division air dropped into Normandy during The Invasion – sporting their trademark ''Mohawk'' Haircuts and wearing Native American ''warpaint'' on their faces. The 1st Detachment was the only Unit to do so.

Their name ''Filthy'' derived from the fact that they did not wish to waste water for baths for anything but drinking and cooking food. As such they had extreme body odor! Hence, their nickname.

Extremely effective in the destruction of many much needed bridges used by The German Army, The Detachment also served as a Rifle Company when not employed in Demolition. They were even present at the epic Siege of Bastonge (1944). Many survivors of The Detachment were somewhat annoyed with the fact that they were ''portrayed as murderers'' in the film, but applauded the fact that they were well known ''troublemakers''.

Five of their number were killed at Normandy, with Five being wounded (but continuing on with their Mission). The last survivor of The ''Filthy Thirteen'' died in 2013. 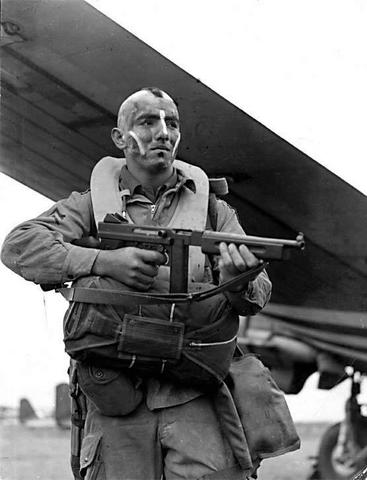