US Douglas A1 ''Skyraider'' Fighter Plane

In The “Jet Age” that was The Vietnam War of the 1960s, The Douglas Skyraider was definitely obsolete by “Modern” Military Aviation standards. Nicknamed both “Sandy”, “Spad” and a host of others, the 1940s designed single-propeller Aircraft nonetheless was a reliable close ground support Fighter throughout most of American involvement in Southeast Asia. Capable of “Danger Close” maneuvering as close as 200-feet off the ground, The A-1 was able to accurately deliver Ordnance much closer than it ‘s faster “Cousins”. Flying so close, The “Skyraider” became an easy target for NVA and VC small arms and Rockets. Due to it’s reinforced fusilage, The A-1 could withstand much damage and still keep on flying.

There were more than 20 variants of The A-1. A single seat Fighter, it was 40-feet long with a wingspan of 50-feet. It was powered by a single Wright 2250 Radial Engine, capable of 2,700-HP. The airspeed of The A-1 was 300-mph. The “Skyraider” was armed with (4) 20mm Wing mounted Cannon and could be configured to carry Rockets or Bombs. Retired from active combat on 1969, it was still used by Special Operation Forces and The Central Intelligence Agency as an “Extraction Aircraft”. Specially designed mounts and hooks to the Aircraft allowed it to physically lift up a “high value target” for quick removal in The Field. 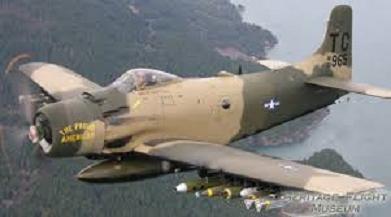