An experimental Fighter developed by The US during World War II (1943), The XP-55 was classed as a ''Canard'' configuration (or smaller wing pattern fixed forward with the primary wings set back towards the rear of the fuselage). This design was revolutionary, with few Nations experimenting with such at the time. The design was seen as producing a superior handling aircraft, to be used as an Interceptor-Fighter (for Bomber escort and coverage).

Three such prototypes were built and tested by The US Government. The XP-55 was also the first such aircraft to incorporate ''tri-cycle'' landing gear (retractable wings front with matching landing gear in tandem farther back on the body). It's Engine was a single Allison V-12, which was rear mounted at the fuselage. It produced close to 1,300-HP. Initial tests gave it an airspeed close to 400-mph. With an operational ceiling of 35,000-feet. The XP-55 could range over 690-miles.

30 feet in length, the primary wingspan was a semi (mock) swept-wing measuring 41-feet. It was crewed by (1). Armament to be installed was (4) 12.7mm Nose Cannon. Plans for Rocket packages were also developed. However, cost overruns quickly mounted and The US Government canceled The Project without any being deployed in combat. Only (1) ''Ascender'' is known to exist at an Air Museum in Michigan (US). 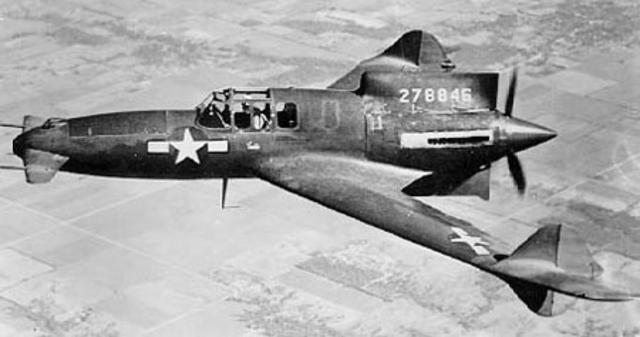