A Carrier Based US Fighter of The US Navy in the late 1940’s, The Curtis ‘’Helldiver’’ was a Medium Dive Bomber which saw extensive service in The Pacific Theater of World War II. Nicknamed ‘’The Beast’’ by it’s Pilots, it was nonetheless a difficult Aircraft to handle. Over 7,000 were produced. The SB2C was also equipped with folding Wings, which
allowed for many such Fighters to be stored and transported via an Aircraft Carrier. Versions were sold to Great Britain, but were again not popular. (15) variants would be created. Due to cost over runs and complaints, most were sold as surplus to other Countries for use in their Air Forces (Greece being a main Purchaser). Crewed by (2), The ‘’Helldiver’’ was 37-feet long with a Wingspan of 50-feet. It was powered by a single Wright Radial Engine, it was capable of airspeeds of 300-mph. It’s operational ceiling was rated at 29,000-feet. The ‘’Helldiver’’ Armament included (2) 20mm Wing Cannon and (2)  .30 Caliber Rear Cockpit mounted Machine Guns (operated by a Gunner). Ordnance packages included either (8) 5-inch Rockets (underwing mounted), deployment of a single 2,000-pound Mark-13 Torpedo or the ability to carry (2) 500-pound Bombs. 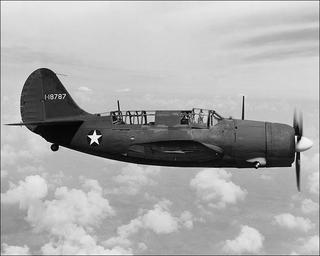